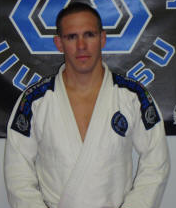 Greg Halsor has spent over 20 years in the grappling arts. Growing up wrestling in Iowa, he was a state champion for Cedar Falls High School in 1993 and went on to be a collegiate All American in 1997. After college, Greg was intrigued by the Ultimate Fighting Championships that he had watched during college and was even more drawn to the little man named Royce Gracie that was introducing Brazilian Jiu Jitsu to the world. After graduating from college, circumstances moved Greg and his family to Crystal Lake, Illinois where he met current WEC/UFC veteran Jeff Curran and fell in love with the sport.  Greg began teaching Brazilian Jiu Jitsu in the Cedar Valley in 2000 and has been watching the sport grow since then. He is the only Brazilian Jiu Jitsu Black Belt in Northeast Iowa and one of the highest ranking practitioners in the state. Greg and his class are affiliated with Jeff Curran and his organization.