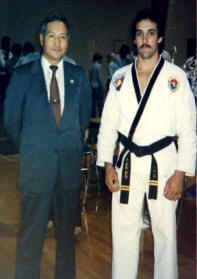 Master O’Connell began his martial arts journey in 1978 under Grand Master In Mook Kim and is currently a 7th degree black belt.  As a competitor, Master O’Connell has won over 60 tournaments and has won national titles in different organizations.

Master O’Connell, while still competing himself, started training athletes in 1984.  Since then our program has produced over 50 National and International Medalists at the USAT level.  The USAT organization is the premier level and the national governing body of Taekwondo in the United States.

Master Juan Moreno one of the USA Olympic Team Coaches has developed an elite National Team program to develop top athletes for the United States for the next Olympic Games and beyond.  This team is called Peak Performance.  Master O’Connell was selected by three time Olympian Master Juan Moreno to serve as one of his regional Peak Performance Coaches.In 1995 Master O’Connell started a Kickboxing program.  Within a few years the program was producing state, regional, national and world champions. In 2002 expanded his program to include mixed martial arts.  With kickboxing being a very important part of this sport, it was a good fit.  Master O’Connell has trained UFC, Strike Force, Iowa Challenge and King of the Cage athletes.